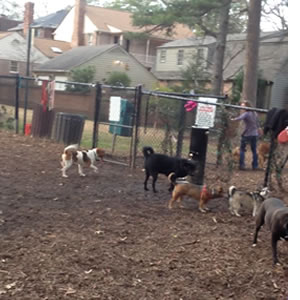 Just took our dog Elvis to the dog park for the first time.  I had no idea it would be so entertaining.  I also found it mystifying that these animals can run side by side at about 104 mph, crash into each other and transform into a tumbling pile of dogs without getting hurt.  They stand up, look at each other, and take off to do it again.  And again.  And again.

Size and shape doesn’t seem to matter either.  If I’m at a party, I’m probably not going to hook up with the big black guy with the gang tattoo on his neck.  I’m going to seek out the middle aged introvert drinking the same beer I am.  Not these dogs.  The clique my dog packed up with included a Dachshund, a Weimaraner, and a pretty mean looking Pit Bull.  And the Pit Bull wasn’t even in-charge; a little three-legged mix was calling the shots!

At one point, Elvis came up to Lesley and I with the whole pack behind him as if to say, “Hey, these are my friends…bye!”

Great time for everyone.

Of course they do.  Reminds me of the way seven-year-olds fight.  I expect the next headline to read:

How did we get from this: 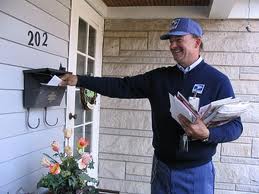 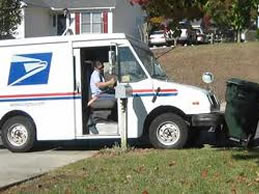 When did this happen?  Shouldn’t there have been a step in between this?  Like bicycles or scooters or something?  What is the next step?  Isn’t there less mail now than there was before email?  This just looks really sad to me.

Ok, enough is enough.  If it is no longer possible for Frito Lay to maintain the quality of a product, then it’s time to let that product go.  My grandfather used to buy me boxes of Cracker Jack.  I remember tearing open the prize before I even started eating the caramel popcorn & peanuts.  There was always some fun little trinket in there; a little plastic ring, a very inaccurate, but working compass, lick-on tatoos, tiny comic books, tiny snap-together cardboard planes that didn’t really fly but were fun anyway, little whistles, plastic magnifying lens.  I used to like to eat all the popcorn first so I would end up with a handful of candy coated peanuts that I would pop into my mouth all at once – the happy ending!

I bit my tongue when they came out with Cracker Jack in a bag instead of a box.  I understood. Maybe not economically feasible, hard to load into vending machines.  Okay.  But then the prizes started getting shittier and shittier.  Now it’s nothing but printed pieces of paper.  If you fold the corners the picture of a founding father becomes a picture of a different founding father.  Wow, how fun is THAT?!  I just can’t stop doing it.  I give them to my friends as gifts.

Today, I got this: 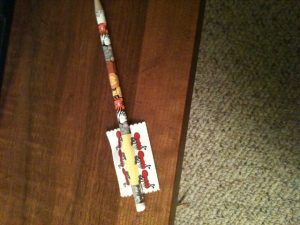 Is there a kid ANYWHERE who would say, “Wow, what a cool thingy on your pencil.  Where’d ya get it?”  Hell no!  This would be a death sentence for any kid!

Give it up Frito Lay.  Really.  You are ruining your legend like Brett Favre….

Kroger was celebrating something the other day with a parking lot cookout.  As I walked by, I heard a customer say. “Where your prices is?”  He said this three times before being corrected by someone else, “You mean, where your prices ARE.”  Am I the only one who knows the correct grammar for this sentence is “Where your prices be at?”

Recently, a co-worker mentioned he was hungry.  I offered him a can of Slim-Fast, to which he replied that Slim-Fast was too “girlie.”  Ok, no offense taken.  To each his own.  Didn’t phase me a bit although in typing this, I noticed the same undertone of bitterness that you may have noticed.  Interesting.  Anyway, a conversation ensued over the need for Slim Fast to step-up it’s marketing plan for men.  So we came up with the following packaging changes for Slim-Fast.  I’m sure the check is in the mail. 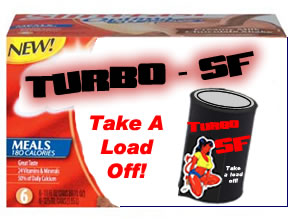