At least this time I was the driver and not the patient. But these Sunday trips to the ER are getting quite routine. I even exchanged hello’s with a few folks using our first names. Anyway, here’s how it happened.

Our friend Doug volunteered to do some wiring for us in our new house. For some weird reason, there are no electrical outlets in the bathrooms and since he used to do construction before becoming a farrier, Doug offered to fix us up. Things were going along pretty good, we cut in the boxes, wired in the receptacles added an outlet and a light in the attic and flipped on the power to make sure everything worked. The GFI receptacle in the master bath did not.

Since the other one did, we thought we’d just pull out the receptacle and see if we (read I) wired it wrong. We (read Doug) did not turn the power off first because we were just inspecting it. What could go wrong? Rhetorical question. Well, as Doug was inspecting it (with his pliers) he began explaining that the ground might be on the wrong terminal. He didn’t actually finish the word terminal.

At first, I thought he threw himself into the wall to be funny. Minutes earlier he was doing his three stooges impression, so I figured it might be part of the act, albeit an elaborate one. But then I noticed his lips were rolled back and his teeth were clenched. Kind of like the teeth they used to paint on 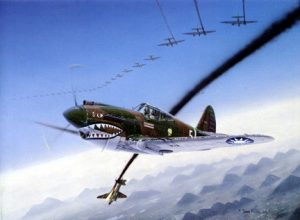 P-51 Mustangs. Then it hit me. HE’S BEING ZAPPED! Man, it seemed to last forever. For a moment, I thought I might have to poke him with a stick or something. But then he dropped to the floor, grabbed his arm and screamed, “Oh F#$%, it wouldn’t let go!” Then he got up, stumbled into the hall and collapsed again. After a few minutes, the initial pain subsided and it was clear something was wrong. One shoulder was lower than the other one and he couldn’t move his arm. Off we went to the emergency room.

By the time we got there, he was in extreme pain. Kidney stone kind of pain. They pumped him full of Diloted and X-Rayed him to confirm his left shoulder was dislocated. They said it was relatively common in electrocution cases. (sorry, but that sentence just cracked me up!) They said electricity causes the muscles to contract so violently that they pull bones right out of their joints.

Wow, they had to pump a butt-load of drugs into him so that a doctor and two assistants could hold him down and pop that thing back in! Man, and to think I got in there for free! You can’t buy a ticket to get this kind of entertainment! Thanks Doug!

Here’s a picture of Doug in the ER. This was right after a shot of Diloted but before they popped the shoulder back in. 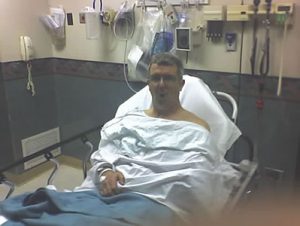