This purveyor of fine cuisine is located right up the street from our house. The sign sort of raises some issues, don’t you think?

First of all, the chef must be considerably younger than me because, if I didn’t learn anything in the sixties, I learned that Oscar Mayer has a way with B*O*L*O*G*N*A. Come on, how powerful was that for learning on a massive scale. Madison Avenue should have gotten a Pulitzer for that gem. Obviously it was wasted on someone. Maybe it’s not wrong; maybe it’s the word sandwich that is misspelled. Hey moron, everyone around here no’s it’s spelled sammich.

Okay, grammar aside, let’s talks about the nutritional aspects of this entree. Deep Fried? Holy chit. I HAVE heard of them being grilled like a grilled cheese sandwich, but deep fried? I hope they balance out the daily minimum requirements by offering a side of lard and garnishing it with fat back on a delicate bed of pork rinds.

I may have to go up there and buy one of these things so I can photograph it and share it with you, the internet.

Brett and I went to Space Camp a couple of weekends ago with the Boy Scouts. It was a great time, very educational and lots of fun – for both of us. The Scouts are a pretty good group of boys, but some of the parents slay me. There were about 16 scouts and 9 or 10 dads, only half of which seemed normal.

The guy with the man-purse and white socks is the dad I liked to call Long stockings. Long stockings was very tall to begin with, but wearing these babies pulled up above his knees made him look even taller. Quite a contrast to the no-socks guy behind him. Long stockings was one of those analogy people. Everything was an analogy. “So you see son, solid rocket boosters are just like the feathers on a bird”. I didn’t say they were good analogies.

Then there was Jerry Garcia. Jerry’s thing was crowd control. If the boys got noisy and/or distracted, Jerry would stand there silently and hold up the Boy Scout sign until everyone else did the same. Eventually it would work, but by the time the boys noticed this stupid gesture, hours even days had passed. It was much quicker to just holler out “HEY, SHUT YOUR PIE HOLES!” but you couldn’t convince ole Captain Trips of that. He would rather stand there like the Statue of Liberty while the boys ran around him like a May Pole.

This is the only photo I have of the dad I named Blurt It Out. Blurt liked to blurt out the answers to the questions the instructors were ASKING THE KIDS. Although he did reserve his wisdom for the really tough questions like what does NASA stand for and who was the first man to walk on the moon. Funny, ole Blurt wasn’t so quick to the answer button when it came to stuff like propulsion and gravitational trajectory. Fortunately, for those we had Mr. Know-it-all. 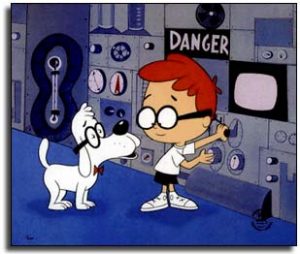 Meet Mr. Know-it-all. No, not the one in the lunar rover, although he IS similarly equipped. Note the fanny pack. Not the everyday run of the mill fanny pack, but the Disneyland Expedition Edition with TWO water bottles, Mayo Clinic First Aid kit with surgical instruments, satellite phone, and inflatable 20-man raft with survival package. Note also that he was using the emergency flare holders to house the paper rockets he built during the boy’s rocket workshop. During the History of Apollo class, I had to listen to Mr. Know-it-all and Captain Trips argue over the elemental make up of air. I kid you not.

Oh oh, Long Stockings seems to be having a malfunction. “Ah, Houston?”

Overall it was a great experience and I would recommend it to anyone; just not with THESE dads.