Why did I do this? WHY? Apparently I blocked out all the madness from my election training last year by the time they called and asked me to do it again this year. Apparently, I had forgotten that I hated working the polls so much that I wrote a song about it and produced a video. Maybe because it’s only a special referendum election, I thought it would be simpler. Maybe since they asked me to be a manager this year which means different people and different classes, I thought things might actually be, well…different.

I’m first sprayed with false hope when a woman sits at my table and immediately says, “I hope nobody asks any questions so we can get out of here”. The man next to me replied, “Well I won’t be asking any”. To which she replied, “Well there is always someone…” 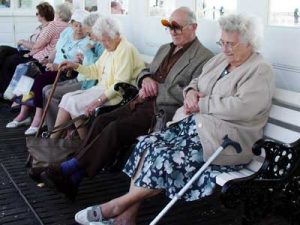 Well guess who it was? Yep. Yep is a new word I learned from Larry the facilitator along with yellar which is apparently a color. Anyway, this woman asked more damn questions than anyone else in the room! She didn’t even notice me staring at her with my mouth open. Have I mentioned how OLD these people are?

I swear to God, it gets worse. Have I mentioned how OLD these people are? They broke us up into groups for our touch screen training and I ended up with Larry the facilitator, Irene, Edna, George and Lubna. Hell no I’m not kidding. All processes done with the electronic voting machines require two people. One reads the instructions while the other one does the tasks. This rule, coupled with the easy to follow instructions with pictures makes the process foolproof. Apparently, the election board has not seen fools like these! While Edna was reading the instructions to George, he was reading them himself at his own pace which of course was not the same as Edna’s. It only took a minute for George to start pressing the wrong buttons. Larry keeps saying “Yep” but nobody knows if he is yepping Edna’s oratory or George’s button pushing. Have I mentioned how OLD these people are? 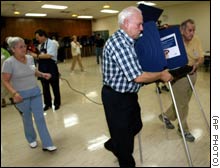 At one point, Edna reads, “now push the red button”, but she doesn’t realize that George is about seven steps behind her at the point where the bold print reads, “DO NOT inadvertently push the red button”. While I seemed to be the only one who sees what’s going on, Larry says, “Now when nah screen turns yellar, yah insert the memory card”. What Larry didn’t seem to know is that the screen turns yellar when it reboots too. I could see the reboot messages on the bottom of the screen, but since it was yellar, Larry says, “Okay Lubna, go ahead and insert yer memory card”. That machine was so hosed that the technician was still working on it when we all left an hour later.

I know I should have learned my lesson by now but I just can’t help feeling obligated to the voting public to be there to at least bring the age curve down to the upper 80’s for Poll Workers. What is the attraction these people have to work as election officials? What?! 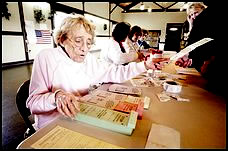