WARSAW, Poland — Poland’s watchdog for children’s rights was quoted as saying she would ask psychologists to investigate whether the TV “Teletubbies” character Tinky Winky is gay. On Tuesday, she backed away from the comments.

Ewa Sowinska, ombudsman for children’s rights, said in the latest edition of a magazine that the purse-carrying character on the British Broadcastinhg Corp.’s “Teletubbies” children’s show could promote homosexuality.

Journalists from the weekly “Wprost” mentioned claims the “Teletubbies” promote homosexuality, to which Sowinska replied that she had heard of the issue. The journalists then asked about Tinky Winky.

“I noticed that he has a purse, but I didn’t realize he’s a boy. At first I thought that must be a bother for him,” Sowinska told the magazine in an interview her office approved before publication. “Later I learned that there could be some hidden homosexual undertones. 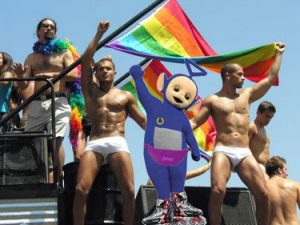