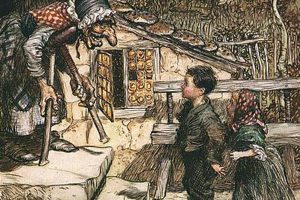 In my routine although fading quest to find my pilot logbook, I came across a beautiful hardcover edition of Grimm’s Fairy Tales that I bought for my youngest daughter a couple years ago. I bought it because I wanted to share with her the same excitement and sense of adventure I remembered experiencing as a child when my mom read them to me. Apparently, my mom was reading from a different Grimm’s Fairy Tales book, certainly not this one. This was the most violent, crude, even anti-Semitic book I’ve ever read; well, out loud anyway.

Of course I started with Hansel & Gretel, the one I remembered the most. I remembered the part about the witch stuffing the kids in the oven, but I didn’t remember the initial plot of the step-mother to leave the kids in the woods for dead in the first place. I could see the look of confusion and concern on my daughters face when I was done. I tried to make up for it a week later by reading another tale from the book called The Juniper Tree. Well, here’s a little excerpt:

After this Marlinchen came into the kitchen to her mother,
who was standing by the fire with a pan of hot water before her
which she was constantly stirring round. “Mother,” said Marlinchen,
“brother is sitting at the door, and he looks quite white and
has an apple in his hand. I asked him to give me the apple,
but he did not answer me, and I was quite frightened.” “Go back
to him,” said her mother, “and if he will not answer you, give him
a box on the ear.” So Marlinchen went to him and said, “Brother,
give me the apple.” But he was silent, and she gave him a box
on the ear, whereupon his head fell off. Marlinchen was terrified,
and began crying and screaming, and ran to her mother, and said,
“Alas, mother, I have knocked my brother’s head off,” and she wept
and wept and could not be comforted. “Marlinchen,” said the mother,
“what have you done, but be quiet and let no one know it, it
cannot be helped now, we will make him into black-puddings.”
Then the mother took the little boy and chopped him in pieces,
put him into the pan and made him into black puddings, but
Marlinchen stood by weeping and weeping, and all her tears fell
into the pan and there was no need of any salt.

This was the point where my daughter looked up at me and said “Daddy, can you read something else?”

My God man, how did I ever get this perception that Grimm’s Fairy Tales was a great children’s book? How come I didn’t remember any violence from my mom’s readings? Then I started thinking about Cinderella and how abused and neglected she was. And how Rumpelstiltskin was actually kidnapped by the GOP to crank out the Princesses’ own line of clothing – just like Kathy Lee Gifford! Here are some other titles from the Grimm’s Fairy Tales table of contents:

The Wolf and the Seven Little Kids
The White Snake
The Singing Bone
The Devil with the Three Golden Hairs
The Girl Without Hands
Godfather Death
The Thief and His Master
The Devil’s Sooty Brother
Stories About Snakes
The Cunning Little Tailor
One Eye, Two Eyes and Three Eyes
The White Bride and the Black One
The Ungrateful Son
The Glass Coffin
The Poor Boy in the Grave
The Death of the Little Hen
Gambling Hansel
The Three Army Surgeons
Lean Lisa
Death’s Messengers
The Grave-Mound

These are not FAIRY TALES, these are TALES FROM THE FRICKIN’ CRYPT and the brothers Grimm were really sick bastards!