Okay, there was this kid I knew that sometimes did weird, unexplainable things. I don’t want to pass judgment on him because as it turns out, he grew up to be a very wise person. Anyway, here’s one of the things this kid did.

I guess he was about nine or ten this particular spring when he was out playing in the backyard by himself. I don’t recall what he was doing – probably playing with matches; the kid was a real pyro right up until age sixteen or so. Anyway, he hears somebody walking across the wet yard next door; slish-slosh, slish-slosh. It’s Vicky Boelter from a couple doors down. She was a few years older than this kid, but always nice to him, even protective of him sometimes.

Everything outside was wet from the recently melted snow and Vicky was wearing red rubber boots. The shortcut she was taking led her right across the Morse’s garden, which seemed to grab on to her red boots and pull her deeper and deeper with each step she took until she could walk no further. She was sunk almost up to her knees and when she tried to pull out one leg, the other one would sink even deeper. The kid started laughing at her predicament until Vicky called for him to come grab her hand. He ran right over to the edge of the garden and pulled her arm as hard as he could but only succeeded in dragging her down into the mud. She was now covered with mud. She pushed herself back up and stood there, both hands caked in mud, red idiot-mittens dangling from her sleeves. 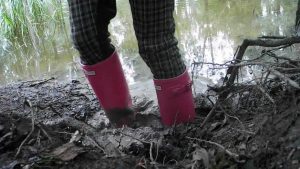 By now the sun was setting so Vicky told the kid to go get help. She didn’t specify what kind of help, but the implication was that the kid should go get Vicky’s mom. So off he went to get help.

Here’s where the thought process of a ten year old can sometimes blur the lines between fear, concern and selfishness. Risk assessment skills are rudimentary, so trying to understand motive in kids this age can sometimes be futile. While Vicky is still desperately trying to free herself from the bottomless garden of doom, the kid rushes towards Vicky’s house to get help, only he doesn’t actually go to Vicky’s house, but veers off back towards his own house. He goes inside, takes off his jacket and boots and walks into the living room where his mom and sister are watching TV. When his mom asks him what he’s been up to, he decides to come clean and do the right thing. “Nothing.” He replies.

At some point while they are watching TV, the kid gets up and casually strolls over to the window where he glances in the direction of the Morse’s backyard. It’s now almost completely dark but he can definitely see the red idiot-mittens thrashing around in the garden area. He turns away and quickly runs back to his spot on the couch were he continues watching the Wonderful World of Disney. When the show is over, mom sends him and his sister off to bed where he sleeps, although fitfully, until his mom wakes him the next the morning for school.

While leaving for school, he looks towards the garden in the morning sun and sees one red boot lying on top of the mud. No other visible signs of Vicky can be seen. No broken tree limbs from the rescue helicopter, no aluminum ladder left by the fire department, no empty IV’s of Ringers Lactate left by paramedics, nothing. She must have been swallowed up. As he walks by Vicky’s house, he listens carefully for the weeping and wailing sounds of a mother in mourning, but hears nothing. The day at school was the longest day of his short life as he thought of nothing but the incident. His mind kept shifting between sorrow from his failure to save someone’s life and fear from the repercussions that would come from this selfish act. Surely he was going to jail.

Halfway home from school as he was about to start crying, someone grabbed his shoulder and spun him around. “What happened to you last night!” Vicky yelled at him. He was dumbfounded. There she was, bigger than life and no worse for the wear. In between all the yelling, he was able to decipher that her big brother who came looking for her after sundown pulled her out of the mud.

This very strange incident didn’t cause the kid to get religion or anything, but it did give him a better understanding of love, compassion, kindness, responsibility and even forgiveness. Either that or it taught him not to laugh OUTLOUD when someone else is in trouble.