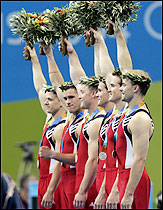 I know these are gymnasts and gymnasts are generally less inhibited than most, in fact, I think the gymnasts have actually been lobbying for these new accessories, but come on. What if I’m not a gymnast? What if I’m a shot-putter, or a weight-lifter? I still have to don the Caligula wreath and pop-poms? Note how number 2’s pumping fist is totally cancelled out by the fact that the other fist is holding up a pom-pom. Or how about the second photo.

Dressing up like this has actually caused number 6 to start leading the crowd into a rendition of Y-M-C-A! It’s just a matter of time before Olympic athletes are chosen for how they look on the podium rather than their athletic skill. 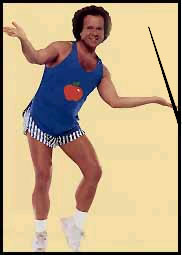