Wow, what a great weekend here in Georgia. Sunday I went horseback riding on Boomer in Dawson Forest, less than an hour north of Atlanta. On Saturday though, it was Sir Jay day.

The poor guy is going through a lot. He’s a very young Thoroughbred who doesn’t seem to know how horses are supposed to act. In fact, he’s more like a big lanky dog then a TB racehorse. When you call him from the pasture, half the time he will run to you and slam on the brakes at the last minute. It’s a huge thrill to see an animal that big so excited to see you. Sunday, when I called the horses and Jay began running, my Quarter Horse Boomer started running too but then he stopped and started looking around like he didn’t want any of the other horses to see him running like a 5 year-old TB. How embarrassing would that be? I’d hate for him to have to stand around the hay bails with his Quarter Horse buddies while they harass him about running through the pasture to see his human.

Anyway, back to Jay. He wasn’t in great shape when he was purchased. He looked a little neglected. And of course he was low man on the totem pole in the pasture. “New Guys” get harassed, chased, kicked and bitten for quite some time until they make friends and establish themselves. Well, he wasn’t putting any weight on, so he was  moved up to the barn where he could be fed three times a day. Obviously he was confused about where his home was in addition to being brand spankin’ “New Guy” in the barn community. Now he’s back out in the pasture and he’s brand spankin’ “New Guy” yet again! And going from the warm dry barn to the cool WET pastures has caused his hair to start falling out in clumps. You know that sparse beard look sported by Smoky Robinson, Bob Marley and Bob Dylan? That’s how Jay looks. No kidding, I heard one of the Palomino’s holler out to his buds, “Hey look, here comes Sinead O’Conner!” (Palomino’s are the worst bullies).

So I spent Saturday grooming him, feeding him carrots and running him in circles around the Palomino’s in the pasture. He loved it too! Especially when he heard me hollering at them, “Yeah, who’s the beeotch NOW you buncha slow beige has-beens – which one of you is Mister Ed??!!” When we were done, Jay held his head much higher and definitely had a spring in his step. Of course, they probably all kicked his ass after I left, but at least he had HIS afternoon in the sun. 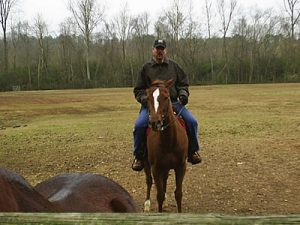